The Customer Information Platform (CIP), an internet-based application operated by RailNetEurope (RNE) on behalf of the Rail Freight Corridors (RFCs), has been successfully rolled out to RFC Rhine-Danube. RFC Atlantic and RFC Rhine-Danube share two important stops, namely Mannheim Hbf and Strasbourg-Ville. This connection enables the transportation of freight from countries like Spain or France in West Europe to Czech Republic or Romania, which are located in East Europe.

Information concerning all RFCs is now available in the CIP productive environment under https://cip-online.rne.eu.

With this, the CIP now provides customer-relevant information on railway infrastructure in 26 European countries covering the entire RFC Network. 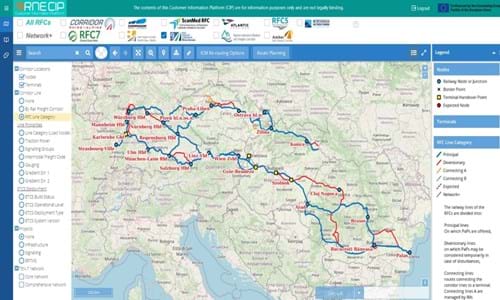 The cornerstone of CIP is an interactive map, which is supplemented by a joint document share point used by all RFCs. The CIP interactive map provides a wide range of information on the rail infrastructure along the routes of RFCs, such as the rail freight-relevant line properties, length of the line sections, ETCS deployment plans and further investment projects. The CIP interactive map also features information about the re-routing options in case of international contingencies appearing along the routes of the RFCs as well as an advanced functionality for route-planning.

In addition to the above, the geographical coverage of CIP is gradually being extended beyond the routing of RFCs, thus covering also the feeder and outflow paths of RFCs’ customers. Moreover, to further improve the experience of CIP users, in early 2021 the graphical user interface of CIP has been upgraded to match the state of the art

These are the partners that make the Atlantic Corridor flow.